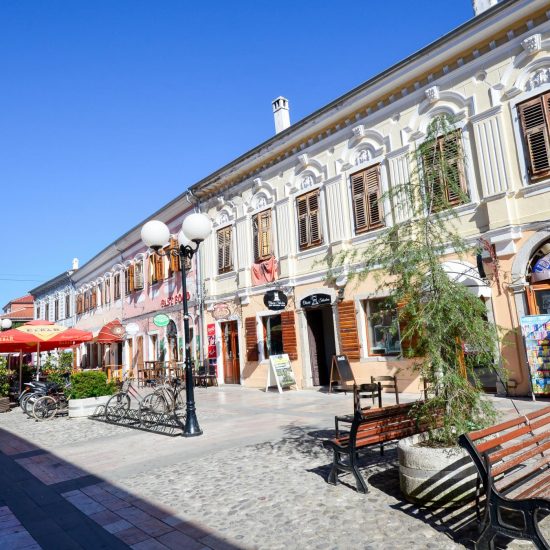 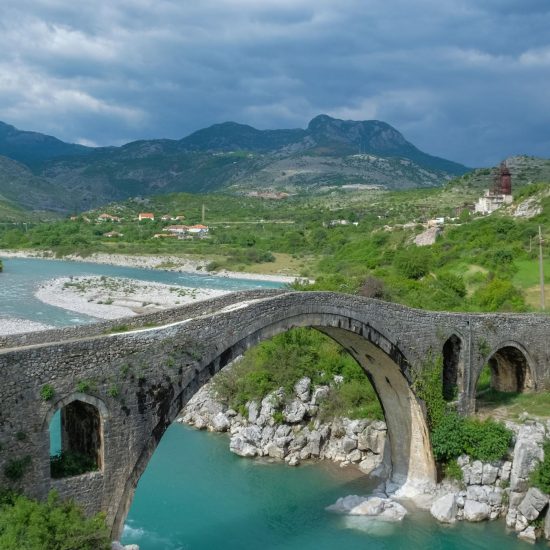 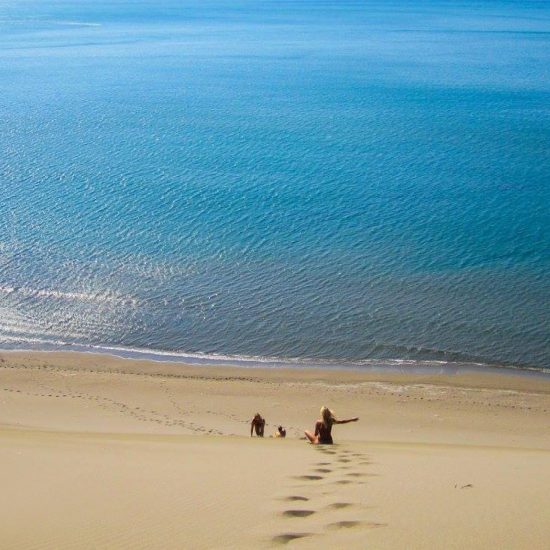 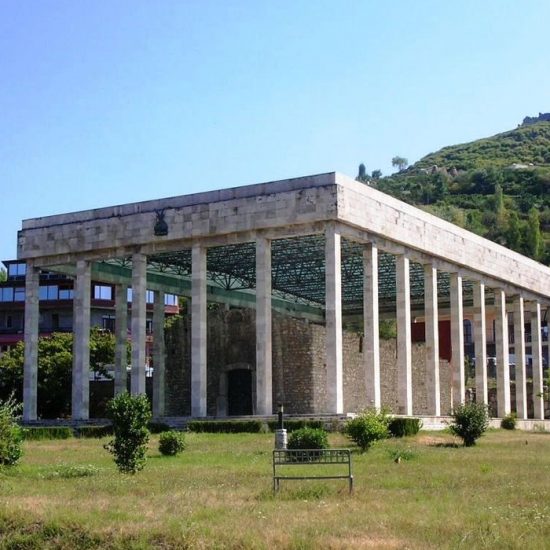 Shkodra is one of the oldest cities in Albania, founded in the 4th century B.C. as the center of the Labeat tribe of Illyrians. Shkodra has been occupied several times throughout history: first by the Romans (168 B.C.), then the Serbians (1040), the Venetians (1396), and finally by the Ottomans (1479). The city returned to Albanian control as the feudal principality of the Balshaj during the 14th century and served as the municipal center of the Bushatllinj Pashallëk from 1757 to 1831. Shkodra is rich in cultural heritage; the city itself as well as the people bear pride in the large number of artists, musicians, painters, photographers, poets, and writers born here. Shkodra’s main tourist attraction is Rozafa Castle. Rising majestically upon a rocky hill west of the city, the outcroppings and battlements paint a blazing picture against the setting sun. It is surrounded by the waters of three rivers; the Drini, Buna, and Kiri. Much like the town it protected, the castle has Illyrian origins. According to the historian Tit Liri, “it was the strongest area of the Labeats.” Like all ancient works, the castle comes with a popular local legend. Rozafa was the name of the bride of the youngest of three brothers who originally built the castle. The three men worked tirelessly by day laying mortar and stone but the walls always crumbled overnight. Consulting a wise man, they learned that to expel the evil attacking at their daily work and protect their friends and family with a strong castle that would last through the ages, one of their wives needed to be entombed within the walls. The brothers made a heart-wrenching pact not to alert their wives to this danger, and whoever brought her husband his noon meal the following day would be sacrificed. The elder brothers broke their word however, and it was Rozafa alone who came with food. When she heard the proclamation, she wept for her newborn son and husband, but allowed herself to become a living part of the walls so that the castle could be built. According to both legend and local folklore, the calcareous water flowing at the entrance of the castle is the milk flowing from one of her breasts, which she requested be left exposed so that she could feed her baby. She also pleaded for one foot and one arm to be left free, in order to rock her son’s cradle at night and sooth him during the day. Historians tell us a less enchanting and more scientific background of the castle’s characteristics. It reflects the dominion of the Balshaj family but passed through enough other ruling periods that each left their own signs and markings on the grounds, including a distinct Venetian flare, some Ottoman architecture from the 16th and 17th centuries, and even a few modifications from the Bushatllinj family during the 18th and 19th centuries. Within the castle walls is a museum where a discerning lover of antiquities could spend a comfortable afternoon reading more about its history, and a restaurant has been added to showcase local food and traditional dress. In addition to the castle, you might also want to visit other notable landmarks, such as the city’s History Museum, near the stadium, and the renowned Marubi Photo Archives. Close to the city lies Lake Shkodra (Skadar), the largest lake in the Balkans with a surface area of 368 km2 (149 km2 in Albanian waters). The lake is notable for its different banks: the southern bank is high and rocky while the northern one is low and marshy. For a leisure cyclist or driver, two main tourist centers are the towns of Shiroka and Zogaj, located on the shoreline. Famous for their fishing, both villages contain restaurants serving the most popular local dish, baked carp. Every August 15th the Catholic pilgrimage of Shën Rrok, or Saint Rocco, is observed in Shiroka to celebrate the historic protector of the town. Tradition holds that after this date it is ill advised to swim in the lake’s waters. Lake Shkodra enjoys warm temperatures, absorbing sunlight most days during the year. Swimming, sunbathing, and rowing are popular for both tourists and locals. In addition to leisure activity, the lake constitutes a very important ecosystem with 281 species of birds and 45 species of fish including carp, eel. The beach of Velipoja is only 22 km away from the city of Shkodra. Possessing unusually high iodine content, the long shoreline is famous for its therapeutic sand and many people have taken to burying themselves in it to relieve bodily aches and pains. Besides swimming and fishing, the surrounding scenery offers many fascinating natural landscapes worth seeing, such as the small island of Franz Joseph located at the mouth of the Buna River, close to the Montenegrin border.

The city of Lezha is located 47 km south of Shkodra. Another ancient Albanian city, it was first mentioned in historical documents under the name Lissus. In 1398, after the construction of its castle, the city was under direct control of the feudal family of Lekë Dukagjini, but was eventually conquered by the Venetians. One of the most important historical events for the city, and indeed for all of Albania, was the famed “Assembly of Lezha” on March 2nd, 1444, where under the leadership of national hero Skanderbeg, Albanian princedoms united against the Ottomans. The Skanderbeg Memorial Grave is located here, at the former Cathedral of Shën Kolli, where he was buried in 1468. The Castle of Lezha, another Illyrian monument, sits on a hilltop overlooking the city below. Inside the castle, ruins of an Ottoman mosque, a Roman arch, and an Illyrian can be found. Only a few minutes from the city you can find the sandy beach of Shëngjin at the foot of Mount Renci. The sunny beach community boasts a long and colorful history, known as both “Cesarean” and “Nympheum” in past centuries. The mouth of the Drini River is located nearby, providing an amazing ecosystem becoming more and more of a key attraction for international ecotourism. Also in the area is the Kune-Vain National Park. With approximately 70 species of birds, 22 species of reptiles, 6 species of amphibians, and 13 species of mammals, it is a wide and diverse protected habitat. One of the most pleasant surprises is the sandy island of Kune, which transforms into a peninsula during low water. With 227 different plants growing on the island, Kune’s dense vegetation provides nesting grounds for many birds and, consequently, many bird-watchers.